Sometimes I just read a line that resonates with me. I came across these two over the last day:

From The Online Photographer: It’s one of the cool things about getting older…sooner or later you live in the future.

– Anything that is in the world when you’re born is normal and ordinary and is just a natural part of the way the world works.

– Anything that’s invented between when you’re fifteen and thirty-five is new and exciting and revolutionary and you can probably get a career in it.

– Anything invented after you’re thirty-five is against the natural order of things.

Its interesting when you think about it. My grandmother, born in 1908, always talked about how her mother would be amazed with the microwave oven, invented, according to the Wikimonster, in 1955. Today we can’t imagine a home without one. Now, I imagine describing to my dad some of the technology we currently use. He was a “shade tree” automotive mechanic, aspiring electronic tinkerer and auto racing fan, among other things, so today’s electronic everything would be his microwave. But it seems like we have a lot more of those things today than we did 50-ish years ago. Maybe it just seems like more magic.

What will ours be?

Monte enjoyed my motion blur photo from a couple of days ago so I thought I would serve up a few more. Sometimes the camera moves, sometimes the subject moves.

Lots of motion blur here today as we await Ian’s arrival. It’s been rainy, breezy and chilly – a good day to work on photos and watch Formula 1 practice! Ian keeps angling further east of us, which is good for us but unfortunately not so good for someone else. Should be by us by morning, hopefully!

I turned the alarm off this morning and went back to sleep, but woke up 15 minutes later and knew what I had to do. 😉

Once more it was worth the effort.

I managed to get my tripod feet (and my own feet) into the sand this morning! 😉

Kathy & I decided to escape from the neighborhood for a few days, and what better way to do that than a late-season trip to the beach? I haven’t done a lot of photography, but did manage to get in a little bit off our balcony on Monday evening, and I drug myself out of bed for a little work on Tuesday morning. Nothing spectacular, but a few frames to show for the effort.

Here are a few more bonus shots to show the ‘clouds’ theme:

Very few people will be interested in this, but for those few who are, here is a brief post about our stateroom aboard Celebrity Summit.

On recent cruises, we have recognized the relatively better value of booking an “Ocean View” stateroom as opposed to a “Veranda” stateroom. The main difference is that an Ocean View stateroom has just a window, which can range from a porthole to a large picture window, while a Verandah stateroom has a balcony, with sliding glass doors from the room. The cruise lines have been quite successful in marketing the Verandah staterooms, since they cost more, thus being more profitable. Some of the newer ships have done away with all or nearly all Ocean View rooms for this reason. But depending on the specific cruise, the price difference can be significant.

This was our third cruise with an Ocean View room, and we have found that there are certain Ocean View staterooms on certain ships, that are much larger than “regular” Ocean View rooms, sometimes to the point where they are larger than the higher-priced Verandah rooms. We have really come to enjoy the rooms in the very front of the ship. They provide an interesting view and more space, with the tradeoff that they are on one end of the ship, so you have a long walk to just about anywhere. But we like it!

So this is just a short overview of our stateroom on Celebrity Summit. Those who have been on cruises will recognize the layout, those who have not might still be interested. 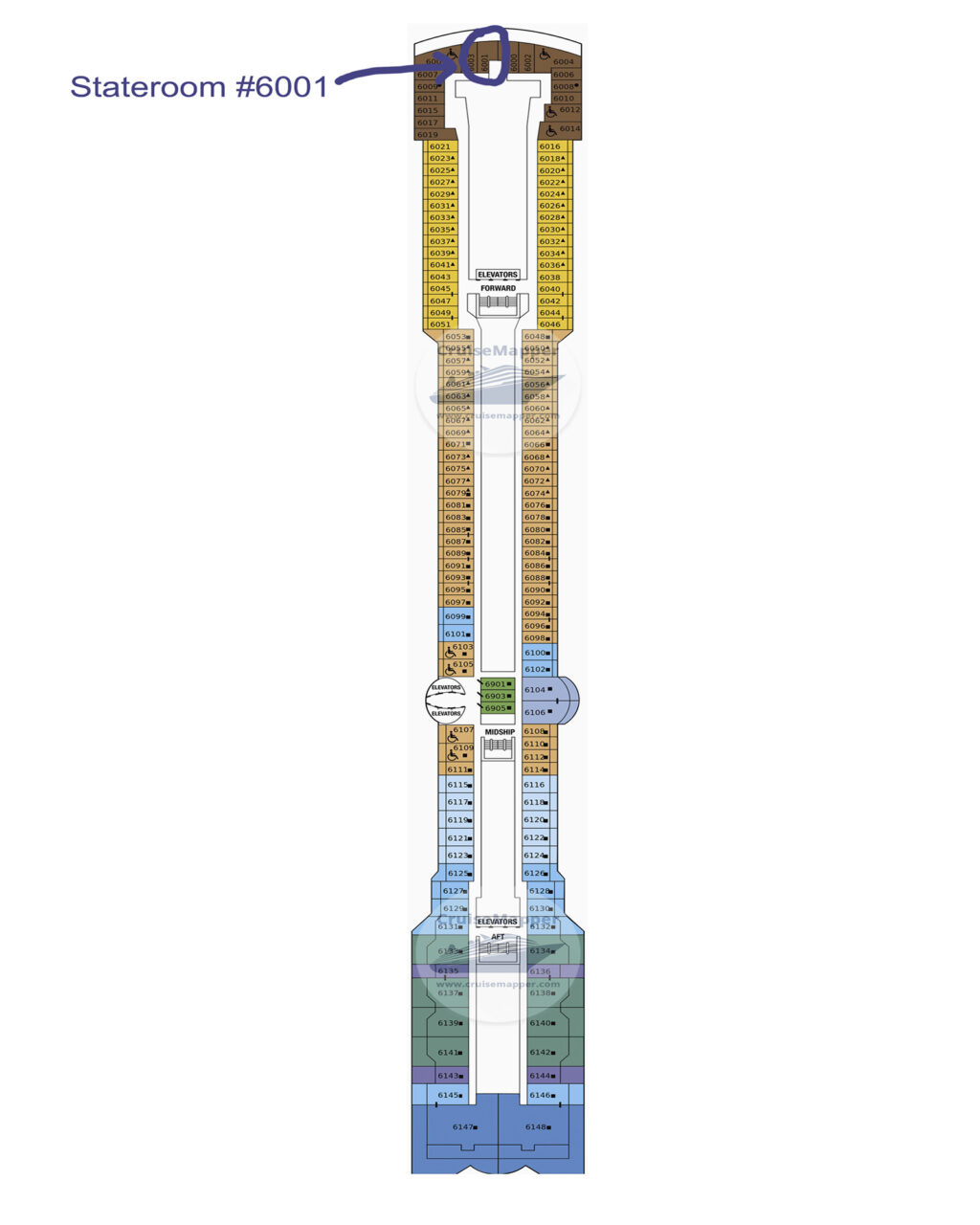 On the day we left Bermuda, we along with “several hundred of our closest friends” were invited to experience Sail Away from the helipad. It is the second time we got to do this, the previous time was on a cruise sailing from Barbados.

On most cruise ships, the helipad is off-limits to everyone but crew. A few of the larger ships do allow passengers on the helipad when conditions are safe. Someone always has to do the “Titanic” thing on the bow.

Generally though, sail away is by invitation only. I asked the Captain’s Club hostess how people were chosen, and she kinda answered that there was no magic formula and that the number was determined by the captain. But I do know that our past-passenger status with Celebrity – high but nowhere near the highest! – had to have helped. It was a fun time, I got a few photos and we had some free champagne-like wine. It is always a treat, and we enjoyed the experience!

The National Museum of Bermuda explores the maritime and island history of Bermuda. The maritime museum is located within the grounds of the fortress keep of the former Royal Naval Dockyard.

The Commissioner’s House is used to display a number of exhibitions. The basement shows Bermuda’s Defence Heritage, a display about Bermuda’s defenses and fortifications since 1612, and the role of local forces in World War I and World War II (this is devoted only to the British aspect of Bermuda’s naval and military history, although there is a separate exhibit devoted to the United States bases). The pillared hall is site of a two-story History of Bermuda mural by the Bermudian artist Graham Foster. The main floor has a number of themes related to Bermuda’s history including slavery, immigration, and tourism. One room is dedicated to the history of the Bermuda Race. The upper floor contains collections of maps, books, coins, maritime art, and exhibits concerning activities of the Royal Navy and the US Forces, specifically during World War II. Other buildings show shipwreck artifacts, local watercraft, or are under renovation.

Downtown St. George’s is a quaint little place, pretty quiet except just before and after the arrival of the ferry. It also serves as the dock for smaller cruise ships, and the Oceania Insignia was docked there during our visit. The shops and restaurants there were very nice. For my money I would revisit St. George’s before returning to Hamilton, due to the hustle and bustle of the larger capital city.

After our tour, waiting for the time to return to the ferry, we had a very yummy lunch at Wahoo’s Bistro, a restaurant recommended by our guide. They are known for their fresh seafood, including their “Fish Sandwich” which consists of lightly fried local fish on raisin bread, with a tangy sauce. It’s a little hard to imagine the combination, but believe me when I say it was delicious! Sadly, I don’t have a photo of it. 🙁 We also indulged and had a Yellow Bird, a Bermudian cocktail made with rum (Gosling’s, of course!), pineapple and orange juice, Creme de Banana and simple syrup. We only had one (each) so we would be able to make it back to the ferry dock!

Most cruise ships that visit Bermuda dock or tender at Royal Naval Dockyard, which sits at the very northwestern tip of the island. Originally established as a base for Britain’s Royal Navy, the Dockyard occupies a strategic location in the Atlantic and has played a role in many naval operations, including a key role in the War of 1812, when the British blockade of American ports was orchestrated from Bermuda.

Today the Dockyard is primarily a marina and shipping port, complete with a requisite shopping areas and restaurants, including the ubiquitous Diamonds International. The “shopping mall” was a disappointing collection of t-shirt shops and souvenir stands, a far cry from the high end shops on Front Street in Hamilton. We wasted too much time there, missing out on visiting the Bermuda Transport Museum as well as a potential lunch at a restaurant that one of our guides recommended. Next time!

Adjacent to the Dockyard is the National Museum of Bermuda, including the former Commissioner’s House which sits atop a hill overlooking the bay. I’ll detail that in another post as it is a destination unto itself.

Wikipedia article about the Dockyard