“A government ought to contain in itself every power requisite to the full accomplishment of the objects committed to its care, and to the complete execution of the trusts for which it is responsible, free from every other control but a regard to the public good and to the sense of the people.”

Photo and quotation are unrelated.  I recently finished reading the biography of Alexander Hamilton and have been reading some of his writings.

My buddy Paul has been documenting a strange phenomenon regarding shoes – sometimes pairs but occasionally single shoes – left unexplainably in strange locations.  I have had my own sightings from time to time, and here is the latest.  I have no idea what has happened to the owners of these shoes, but Paul’s theory – and I’m a believer – is that these poor folks have been abducted by aliens.  No idea why the aliens don’t want the shoes – that remains a mystery!

Kathy & I spent a nice quiet weekend in the Waynesville, NC area last week. It was sort of a birthday celebration but was primarily an excuse to escape the Charlotte heat and get away to the quiet and cool of the mountains. We ate at a few of our favorite restaurants and explored a bit of the area, but mostly we “chilled.”

We had a nice hike in the Smokies along a quiet mountain stream, had a picnic lunch and spent some time at a few overlooks on the Blue Ridge Parkway, but nothing especially noteworthy.

At one point while sitting at a picnic table having lunch, one of us remarked at the number of people who come roaring into the parking area, race to the bathroom and barely have time for the car to cool down before they fire it up and race on to the next destination. Once in a while someone would “picnic,” which basically involved carrying their fast food container and half emptied “Big Gulp” over to a table, gobbling down some unrecognizable carbohydrate, then do the same hop back into the car and roar off thing.

We see the same thing happen at an overlook on the Parkway. We’ll be sitting in the car enjoying the quiet and the view, and car after car will drive in, stop without even putting the car in Park, stick an arm or a camera/phone out the window then drive off. Drive-by sightseeing!

One of us mentioned that – if they ever even took the time to notice anyone was there – these people would think we were crazy for just sitting around doing “nothing.” But what they fail to realize that “nothing” is actually “something,” but that too many people don’t bother to think about the benefits of just sitting and enjoying the view!

We don’t get to do it as often as we might like, but Kathy & I enjoy taking day trips to places that are just an hour or two from home. We visited West Jefferson, NC a few weeks ago for the first time in several years, having previously visited to photograph the town for a magazine assignment.

West Jefferson is a nice mountain town, just busy enough to not be considered “sleepy,” but not as zoo-crazy as a place like Boone or Blowing Rock.  Needless to say, that was one of the things we remembered about West Jefferson, and was one of the reasons we wanted to go back.

One of the notable things about West Jefferson is all of the murals on the sides of the buildings.  The scenes are varied, but generally reflect the history of the town or are some kind of artistic or humanitarian expression.  There are a number of interesting shops and art galleries, and even a photography gallery.

I naturally had my camera with me, and while many of my photos would not be considered “Chamber of Commerce” shots, I had fun finding the things I like to find and capturing them with my camera.

We found it an interesting place to spend the day, and ended up coming home via the Blue Ridge Parkway which crosses nearby.  It was a nice place to visit and one we hope to return to again soon.

Kathy & I made a late afternoon stop this past Saturday at the Little Glade Mill Pond along the Blue Ridge Parkway, not too far from the intersection with US21.  The light was right, the colors were great and I mixed up the fuzzy and the sharp.  I don’t get to pull out the 55-200 often, but it was just the ticket for this group of photos. 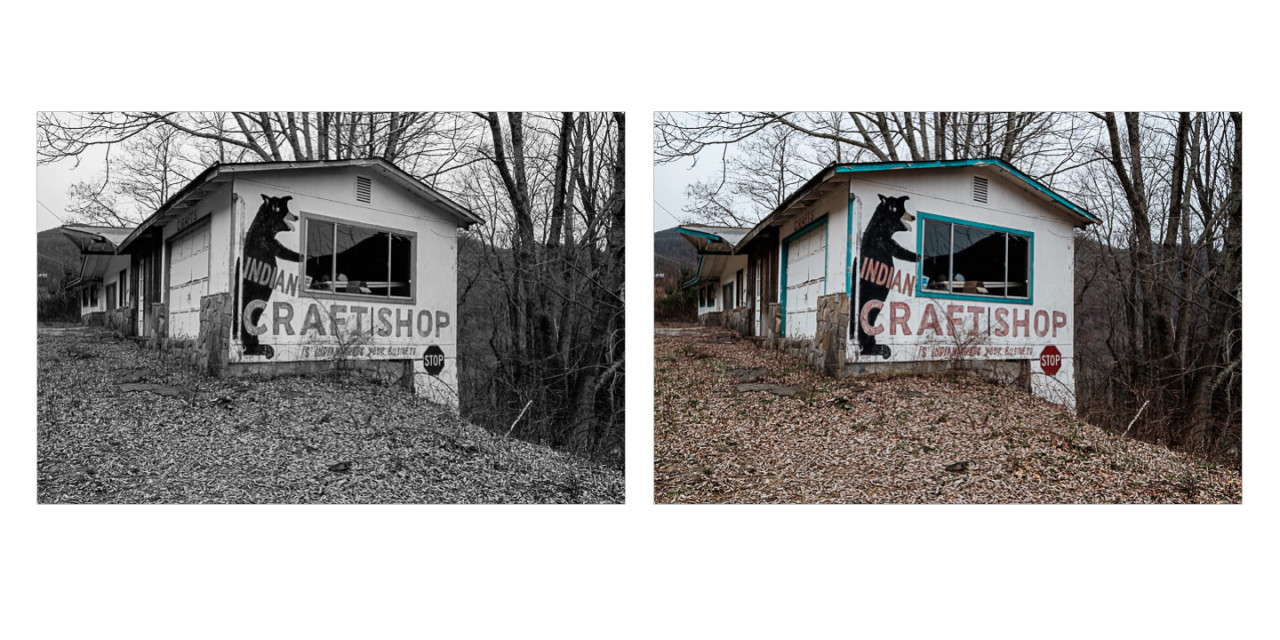 I mentioned in an earlier post about how I struggle between color photos and black & white photos.  While the black & white versions are OK, I tend to see and feel in color so the color versions of my photos often win out over the black & white versions.  Here are some sets of images from that same post, along with their counterparts.  I’d love to hear some feedback on the pros and cons.  I know that ultimately my photos need to reflect my voice, but I also know that I have lived a pretty sheltered existence when it comes to my experience with black & white photography. 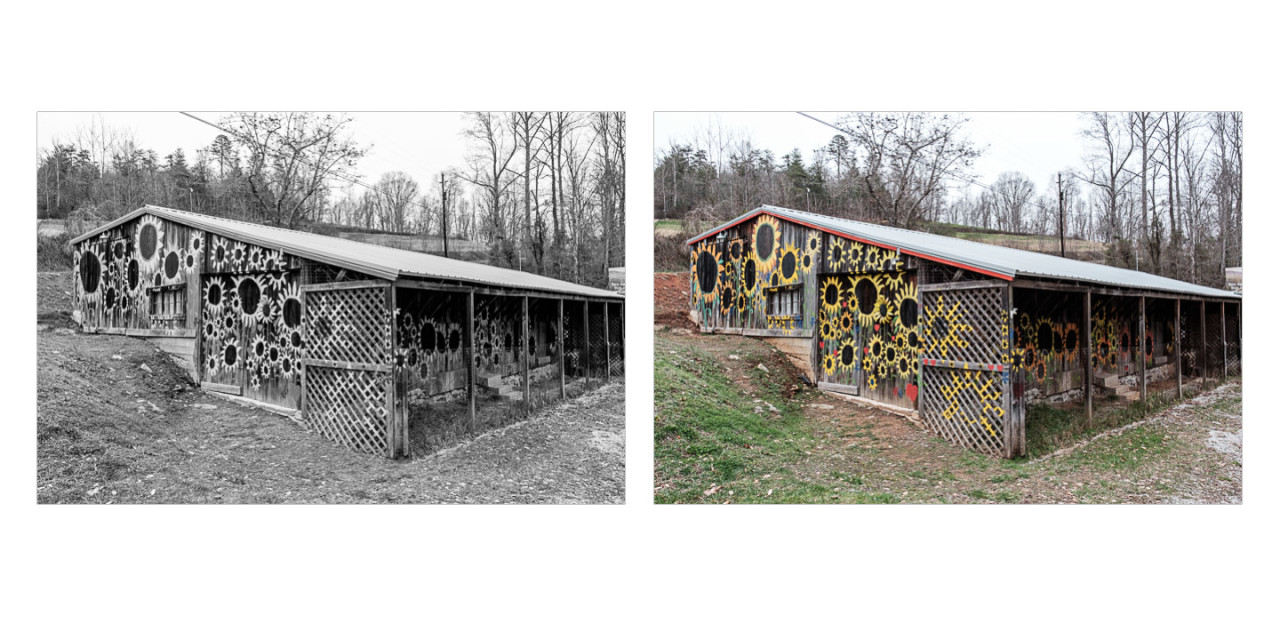 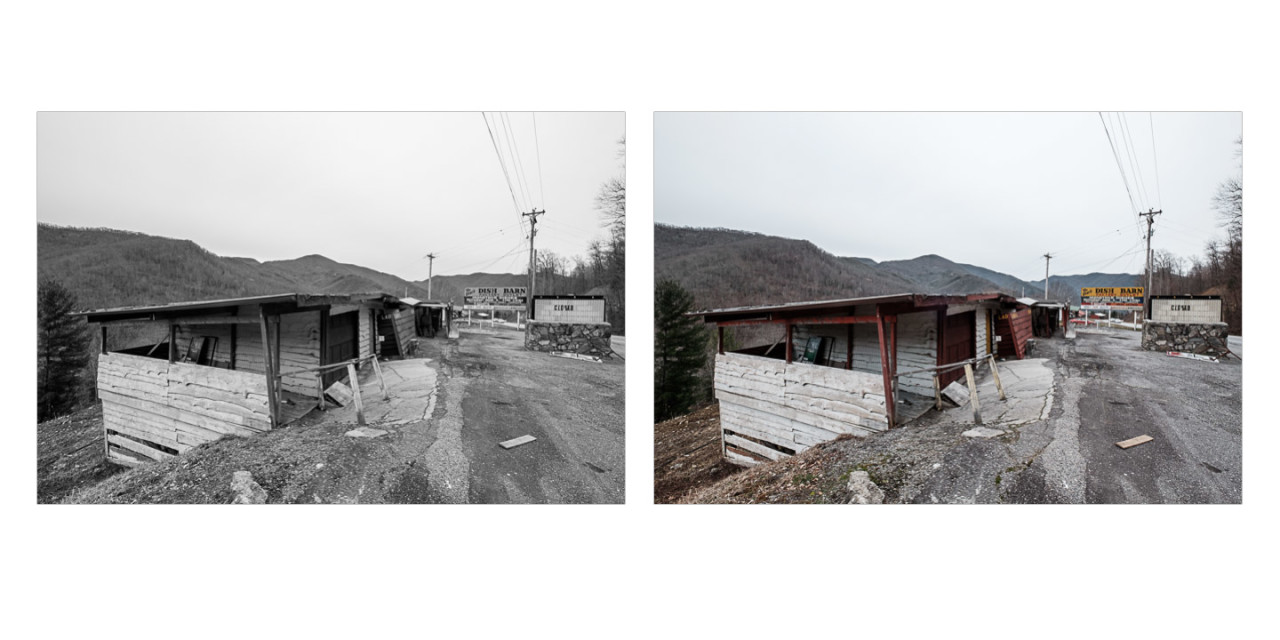 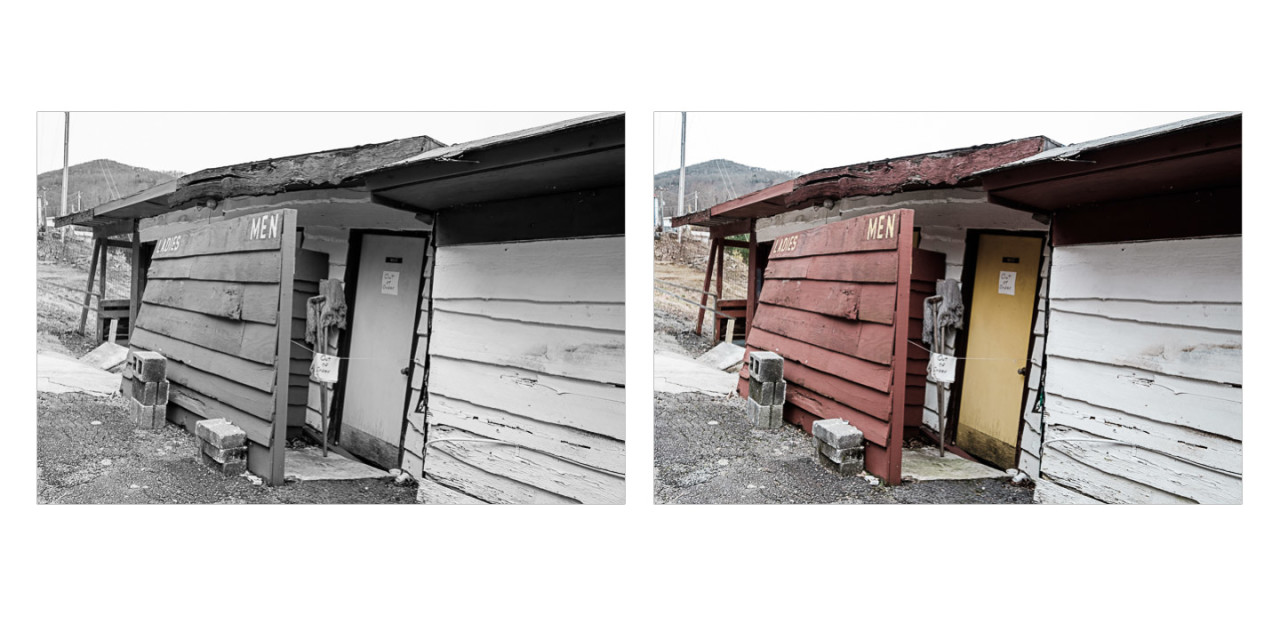 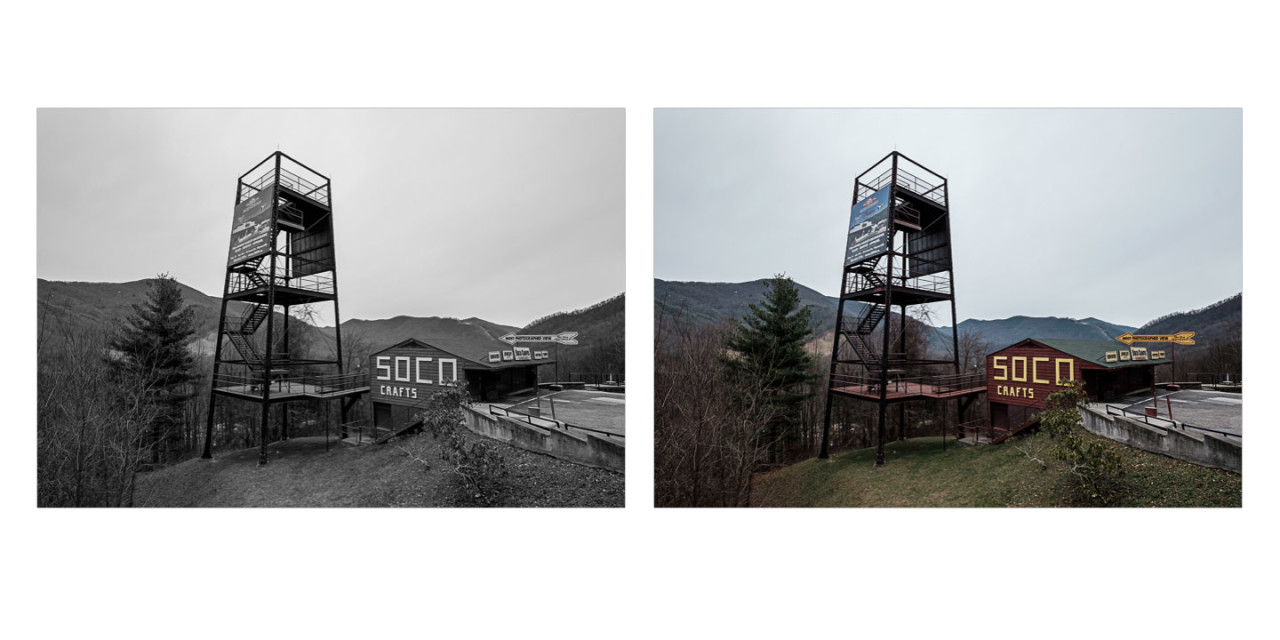 This year Kathy & I had an opportunity to do something a little different for New Year’s Eve. Certainly different than most people we know, although most people who know us would thing that it made perfect sense. As many of you know we are on Baby Watch these days, as Grandson #1 is due at any time. We want to be ready to assume our roles as soon as it’s time, so we so we haven’t been making any advance plans.

Daughter-In-Law Kristin had a doctor visit on Wednesday, and baby Edison didn’t seem to be in any hurry, so we decided to look at options for a New Year’s Eve celebration. As it happened everything sort of fell into place. I found out that I would be excused from work early on New Year’s Eve, our favorite Waynesville restaurant, which had been booked solid for a week or more, suddenly had an available reservation, so I grabbed it. We got a room at the little motel we like to visit there and made plans for a last minute getaway. We’ve had lots of practice and were packed in minutes!

We had a nice dinner then drove to a couple of our favorite overlooks on the Blue Ridge Parkway.  The sky wasn’t real clear but we got above a dense layer of fog and were able to see some lights in the towns below and plenty of stars above.  We had taken along a bottle of bubbly but decided not to drink it then drive back down through the muck.  I had my camera along but decided that trying to learn night photography would probably ruin the moment and stayed in the car where it was warm. 😉 We made our way down through the fog and were back to our room shortly after 11. I remember hearing some noisemakers at midnight but that was about it.

We had a leisurely drive on New Year’s Day, and I stopped along the way to make a few photographs. Nothing spectacular or probably portfolio-worth, but it was a nice way to spend the day. We are now back on duty as Grandparents In Waiting, and waiting patiently!

I’ve been working on finishing up my photos from our Colorado adventure in June, and I’m just about there!

I didn’t have a lot of things that I had pre-visualized for our trip, but one of the things that I wanted to come back with was some nice photos of Aspen trees.  I’d eventually love to go back in the fall, but June was a great time for some spring green.  We get that here in April & May, but of course we don’t have Aspen.  We do have Birch, but it’s just not the same.

I have a few more Aspen photos that I like a lot, but they are going to require a lot more work to see if they can be made presentable.  It’s kind of a funny story in a Murphy’s Law sort of way.  There was one grove of Aspen that I liked a lot, but there was a blue wire fence running through them, I think it was part of an elk enclosure.  As I was shooting I assured myself that the blue fence would be rendered invisible by the motion.  But wouldn’t you know it, the vertical movement of the camera tracked parallel to the fence, so the fence is perfectly rendered in the background.  Crap!  I’m going to have to spend some time in Photoshop to see if I can do an adequate job of erasing the fence.  I’m quite rusty with my skills but I’ll see what I can do.

Kathy & I are off on our latest adventure next week.  Photos and stories to follow!

Monte very astutely observed in my last post that all of the photos I posted had people in them, and what a departure that was for me.  And it’s true – people who don’t know what kind of photography I do frequently ask me if I do weddings, and I almost always reply that I don’t take pictures with people in them.

On our recent visit to Asheville, however, I took way more pictures of people than I ever do.  After Monte’s comment I realized that, for me, Asheville was all about the people.

A lot of places tend, for me at least, to be about other things – buildings, architecture, historical landmarks, nature, etc.  But even though most of those other things can be found there, Asheville was mostly about the people.

I think the thing I enjoyed most about shooting there was that no one really paid any attention to me.  Here in Charlotte, a person with a camera is often looked upon with suspicion, especially by the rent-a-cops that stand in front of (“guard” would be a misuse of the word) the bank buildings.  A few people cast a sideways glance, but it seemed like for the most part I was just another tourist, and one who happened to have a camera.

I did find that using a wrist strap on the camera instead of a shoulder strap helped me be more spontaneous, and to a certain extent it made the camera a little less apparent to the people I was aiming it at.  All in all it was a fun experience, and one I hope to try again soon!