I’ve gotten a little more time to shoot with the 5D Mark III over the last few days.  Saturday I was teaching a digital point & shoot class for The Light Factory, and part of the class time is spent out actually taking photos.  What a concept – a photography class that actually goes out and takes photos…amazing if I do say so myself!  I cheated a little and took the 5D, with full disclosure to the class, of course.  And after using my G12 in the previous session.

I’ve still a little vexed by what I feel is most likely a learning curve in Lightroom…my files seem to be coming in flat and dark, and only after applying a pretty aggressive tone curve adjustment can I get them where I want them.  I thought maybe I  had some kind of Auto Tone turned on, but nothing I see indicates that I do, and even if I did I think the images, if anything, would look lighter instead of darker.  I also saw on a video tutorial something about some automatic highlight suppression that Lightroom is doing, but I haven’t found anything definitive about that.  So for now I’ve got something that works and I’m using it.

I’ve posted this photos a little larger than usual in case anyone wants to do some peeping.  Click on each photo to make them bigger (dare I say “embiggen?”).  They look pretty good, I think. 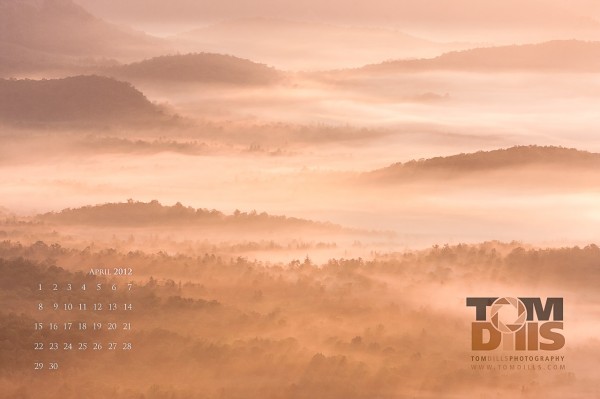 For those of you who I forced to spend a few extra days in March…sorry.  The weekend got away from me and before I knew it, well you know.

One of my favorite sunrise locations at any time of the year is Pounding Mill Overlook, on the Blue Ridge Parkway just south of the junction with US-276 that runs between Brevard and Waynesville.  It’s either hit or miss here, but generally speaking if you aren’t socked in with clouds you’ll get something worth pulling the camera out for.  Fog in the Pink Beds is always a good bet, and a nice golden glow from the rising sun makes for a doubly special sunrise.

Things may be a little quiet here for the next week or so as we head out on our next adventure, but with any luck I’ll come back with some nice shots of the Shenandoah National Park area.  They had a little snow at Big Meadows this morning, so you just never know what you might run in to!

Yesterday, Paul Lester & I made a trip to Salisbury, NC to meet up and do some photography with fellow photographer and blogger Earl Moore, aka “The Earl of Salisbury.”  Earl and Paul had met previously, but while Earl & I have been following each others’ blogs for a few years we had never met.

After a cloudy and damp start it was a great day.  Earl was the consummate host, showing us around town for a few hours, then treating us to lunch at a nice little Thai/Chinese/Japanese Sushi place called “Bangkok Downtown” before a final stop at the Salisbury National Cemetery.  Well, final in a figurative sense, not in a literal way. 🙂

As is typical of a Southern town, Salisbury has a lot of churches.  Most of the popular denominations seem to be represented.  There is probably a covered dish dinner going on somewhere in town every day.  Just like at the mall, there is truly something for everyone.

I took over 250 photos, which is a lot for me, but there was a lot to see and shoot.  Mostly it was enjoyable to spend time talking and photographing with friends.  A number of the photos I took have more of an “urban decay” theme, and while they are interesting I won’t post them here because they don’t suit my intention for this article.  I’ll probably use them to illustrate another article I have in mind, but for now they will remain unshared.

I truly enjoyed my time in Salisbury and hope to return there again soon.  The train station itself is a place where I could spend hours.  The cemetery will be lovely when the grass greens up, but before summer’s heat takes its toll.  And there are a lot of shops and restaurants to explore…I’ll definitely be back!