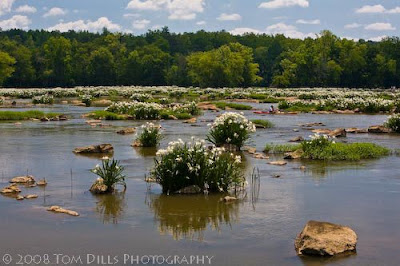 To cap off our vacation week, we spent Sunday of Memorial Day weekend with our friends John & Marcia at Landsford Canal State Park in South Carolina. Landsford Canal is home of the largest collection of Rocky Shoals Spider Lilies in the world. They bloom from mid-May to mid-June at this spot along the Catawba River. I had heard about these but never seen them before. What an amazing sight!

This image gives an overview of the shoals and shows just a portion of the thousands of flowers growing at this special place. 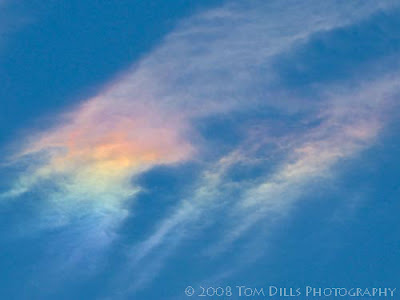 We’re spending this week at one of our favorite vacation spots – Hilton Head Island in South Carolina. We’ve been pretty busy and I owed Kathy some Tom-time, so I left the majority of my photo gear at home. Not being one to travel anywhere without some kind of camera however, I have my Canon G9 with me “just in case.” I shot this image of sun dogs from our balcony while we were taking a break from the beach and having lunch. It’s a fun and colorful image and one I thought I would share. 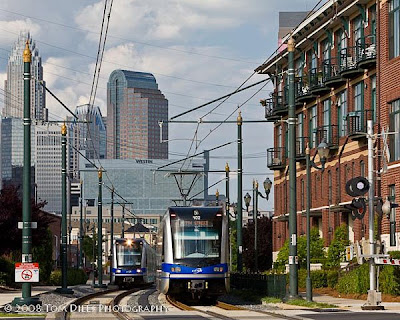 I’ve been wanting to get some shots of Charlotte’s new light rail, the Lynx, since it went operational in November of last year. I have a number of shots of the Charlotte Trolley cars, and wanted to get some nice images of the Lynx to add to my collection. I purposely waited until spring to get some green on the trees and in the grass. This past Sunday turned out to be a perfect day – clear air, blue sky and some nice clouds.

This shot was taken at the rail crossing at Park Avenue in Charlotte’s South End.

This is a recurring theme, and one I have played over a number of times, but bear with me. Driving to work this morning I remember thinking, as I was merging into traffic, that sometimes you have to back off a bit in order to get into the fast lane. The lane you are merging into is jammed with people barely going the speed limit. Because the next lane over is doing about the same thing, you can’t get over to the lane where the traffic is actually moving at a reasonable speed and not full of trucks. Instead of jamming on the gas to try to force an opening, it sometimes works better to just keep it a little slow, let the people in the next lane over get past until an opening catches up, then make the move into that lane and eventually into the lane you want to be in. A few miles down the road you have settled in nicely, the people in the other lanes are changing frantically in an attempt to gain a spot or two, and you are right where you knew all along you wanted to be.

This concept has parallels with my photography. Going into this year, I decided to set some pretty serious goals for the business side of my photography. In order to get where I want to be, I had to get certain things done or it was never going to happen. Knowing that I only have so many hours in a week to devote to it, I had to prioritize. I’ve been saying for a long time that what separates me the most from people who do this full time is that (a) they are independently wealthy or (b) they spend a lot more time on the business side of things, which they typically do while I am at my day job trying to earn a living.

Like so many people, when I made the switch to digital about three years ago, I was unprepared for the huge shift in time commitment that would go along with it. The money commitment was hard enough, but the time needed to review, edit, process and catalog images is huge, and I quickly fell behind to the point where I had 20,000 digital images in my collection but no way to know what was any good and where the good ones were or how to find them. By necessity I developed a workflow that I was comfortable with, but that was late last year and I had three years worth of work to catch up on.

I realized that if I kept shooting the number of images I have been shooting since I went digital, there was no possible way I was going to (a) catalog and keyword all my images, (b) expand my submissions of stock images to magazines, (c) update my website, (d) buy a printer and learn how to use it and (e) lots of other nagging things too numerous to mention. After some thinking, I concluded that the best solution was going to be to scale back the amount of shooting I was doing. Less shooting = fewer photos = less time processing = more time for the priorities. With just a few exceptions, I have been limiting my shooting to magazine assignments and places where I have a specific theme or subject I am looking for. While I could certainly stand to have a few hundred more spring images in my inventory, that can wait until next year. In the mean time I have rediscovered last year’s spring images, which in a lot of ways is better than taking new ones, because I already had some good ones and they haven’t cost me anything but time.

The best news is that it is just now the end of April, and I have captioned and keyworded all my images (not to a great level of detail but at least to the point where I can find them), submitted a number of images to new publications, completed an overhaul of my website and purchased a printer. So far I have only managed to crank out a few crappy looking pieces of paper with ink on them, but if that’s how I spend my time the next eight months I might just figure it out. In the mean time I can put a stock submission together in about an hour, process images from an assignment and turn them around in a couple of evenings, and have a few hours a week to pretend I am a normal person. I’m cruising along in the lane I want to be in, waiting for my exit to come up, and when it does, I’ll be back out there in the middle of Cades Cove or somewhere trying to add to my photo collection.

Beats the heck out of being a Photoshop zombie.

I came across this image while going through some of my work from last year. It was shot in June last year along the Blue Ridge Parkway in Virginia at a place called Groundhog Mountain. Even though it was taken in June I thought it looked springy, so I went ahead and made it up to post.

If you walk outside, look at the sky and your first thought is about pulling down the luminance on the blue channel for more contrast, is that a sign you’ve been spending too much time at the computer?

My new website went live last week! It was long overdue, as my old site had gotten a bit dated and the photos were almost two years old. I really like the new design, and I am able to update it myself with no programming knowledge. Which is good, because I don’t have any and don’t have the time or inclination to learn.

The new site is easy to use, I can tweak it any time, add new photos, captions and change the colors whenever I want. Check it out: 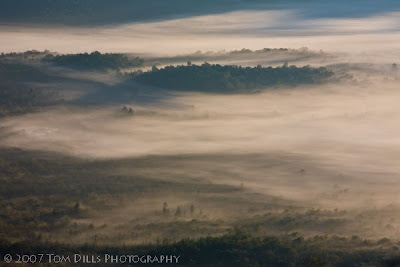 I “discovered” this location on an outing with some of my CNPA buddies near Brevard last fall. This wasn’t where we planned to go for sunrise, but it turned out OK. This is one of a number of shots from that morning. The fog was laying in the valley with the taller trees sticking up through, and as the sun came up it made for some interesting shadows.

This must be the time of year I think about starting something new, like this blog (what time of year do I actually get to finish something?). It’s been almost two years to the day since I created this thing, and here I am. What happened to last year? Who knows?

Anyway, I finally finished processing my images from last fall. It was a bunch – thank goodness for Lightroom! My next big hurdle is updating my website since my “New Work” section has images from our Kentucky trip in September 2006. Yikies! More to come on that, but my goal is to have it done by the end of March, so we’ll see how industrious I am.

I have been inspired lately by some of the content others have been posting on blogs and thought, why not me? I have all these crazy thoughts bouncing around in my corporate-culture- suppressed quasi-artistic brain and have been looking for a way to get them organized. We’ll see how this goes. If it sucks, well, there’s always the Delete button!