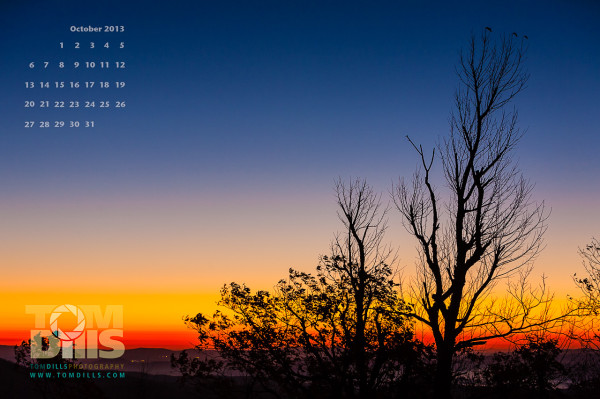 I didn’t shoot a lot of desktop-worthy fall color last year, so I had to go back two years for this one.  While it isn’t “fall leaves and acorns” it is nevertheless color in the sky that you just don’t get too often over the summer.  Not until the humidity blows off do you get these vibrant colors in the mornings.

Pounding Mill Overlook is on the Blue Ridge Parkway just south of the SR 276 intersection, so whether you are in Brevard or Waynesville it is an easy sunrise destination, especially in the fall when sunrise is at a very civilized time.  People don’t believe me when I say that the best color is often 30 minutes or more before sunrise.  Why?  Because people don’t usually start looking that soon, and because it is still really, really dark.  But the color is there, you just have to be ready for it.

Kathy & I have a little bit of fall travel planned, although we will mostly be making day trips. I’ve used up nearly all of my vacation time for this year, and we’re holding onto what few of our vacation dollars are left until we can close on our house.

I like to photograph interesting signs and weird stuff.  Here are a few more from Nova Scotia.

I sort of half inadvertently developed a series of photographs of people working.  Some more interesting than others, but all with a story or two to tell.

I’ve been running through my Nova Scotia photos looking for themes.  One of the things I typically look for when wandering through a town are little details.  These are a few that I took while we were in Lunenburg.  Most of them were taken on the way to or from breakfast or dinner.  See, photography and dining don’t have to be mutually exclusive! 🙂

When Kathy & I want to really get away and relax, our favorite destination is the beach.  And when we want to go to the beach, our favorite beach is Hilton Head Island, SC.  We spent Labor Day Weekend there.  With our house project rapidly nearing completion, and all the stuff that goes along with that, we knew that this would probably be the Last Hurrah for us for this year.  I’ve used up just about all of my vacation time, and we’ve used up just about all of our vacation money, and what little we have left will probably be earmarked for furniture and stuff.  It’s amazing how a new house tends to make all of your furniture obsolete!

I’ve taken some of my favorite photographs at Hilton Head, but after a while it gets a little tough to do something new.  So I mostly stick to the tried and true and hope for some inspiration along the way.  I typically like to shoot when the tide is out, as I can frequently find some sand textures and pools that add some interest.  This time, it seemed that sunrise and sunset generally coincided with high tide, so I was left with fewer options.  That, combined with an overriding need for sleep kept me in the bed for all mornings but one.  And I did manage to get out one evening, which was a nice departure, as we usually head out for dinner just about the time the light is getting nice.  So, with one sunrise and one sunset to work with, I don’t think I got anything I’ll be hanging on the wall, but it felt good to get out when I did.

I’m still putting the old 5D through its paces, and am convinced that it is working just fine.  I just wanted to be as sure as I could be before I put it back in the pack in a backup role.  The biggest surprise for me was how quickly I got dust on the sensor!  With the automagical dust removal system of the newer Mark III I never have to worry about dust.  But the combination of small apertures and no sensor cleaning means I’ll need to pay a little more attention.

I’m still working on Nova Scotia photos, too.  So I’ll have a few things to post about coming up, even though my adventures may be on hiatus for a little while!

Tired of Nova Scotia photos yet?  Good,  ’cause I’m not!

Another photo from our July adventure, the light is what I think makes this photo. The boarded up windows on one side and the hint of color in the other window hint at possibly a difficult past with some hope for  the future.

We saw a lot of buildings with this shake siding, much of it in need of a coat of paint. Probably very durable against the elements despite occasional deferred maintenance.

I hope everyone has an excellent September.

I got my camera back from the shop last week and had a chance to test it out over the weekend.  Kathy & I visited Shelton Vineyards with some of our nature photography buddies.  As far as I can tell it looks like the machine is functioning properly.  The operator felt a little rusty but I got the hang of it pretty quickly.

I’m still not convinced that this is the successful photograph I thought it would be when I made the frames, but I’ve enjoyed working on this one.  I originally envisioned a high-contrast, low-saturation photo and thought it might work in monochrome, but (a) I think I’ll always be a color sort of guy, (b) I never did get the hang of what a black & white photo is “supposed” to look like, and (c) I might not be working on a good enough example.  Hard to say.

I think it’s a pretty interesting scene.  It’s a little cluttered, but I feel it has good balance and good light.  In the post sunset twilight I was trying to capture an old-timey look that would suggest a vintage photograph, although not necessarily black & white, rather than one taken with a new-fangled digital camera.

Sorry, I couldn’t resist the pun.  Besides, it gives me a great excuse to show photos of…buoys!

I’m processing photos as I find ones that interest me.  Sometimes I have words to go with them, and sometimes I don’t.

These are really cliche, of course.  But when you see them you still have to shoot them.  I think there is rule about that.

I’ve found some photos that are going to require my time and attention to get the look I have in mind, so in the mean time, here are a few Velvia-like photos of fishing stuff.  I hope you enjoy them!

I mentioned in an earlier post about having broken my camera while in Nova Scotia.  Here’s the story.

We were driving around the Grand Pre’ valley late one afternoon, doing some sightseeing in the beautiful light that was so common there.  Driving down a country road, Kathy – the eagle-eyed eagle spotter – spotted this bald eagle perched atop a telephone pole.  I slowed way down to see if I could get a place to pull off, but there were ditches on both sides of the road, and the road was lined with rows of corn, so there was not a lot of choice.

Fortunately, I chanced upon a tractor path that I was able to back into, which gave Bill on the passenger side of the van a good shot out the window.  My camera, of course, was in the back of the van.  Keeping the van between me and the eagle, I was able to work my way around the back, open the door without causing too much of a fuss, and assemble my 70-200 and 2X teleconverter.  He was still a long way off, but that was all I had.

I’m not sure why I decided to put my old 5D on this lens setup.  I was probably thinking that I didn’t need to use 22 megapixels on what would probably amount to a bunch of sleepy eagle photos, and that 12 megapixels would be plenty.  I just don’t remember.  So, by my count I had taken 34 sleepy eagle photos, he was just sitting there, posing and looking cool.  He would occasionally turn his head to one side or another, but that was about it.  Zzzzzz….

On the 35th frame, the camera made a strange clunking sound.  It sounded like the shutter was still open, since I didn’t hear the mirror return to its usual position.  The camera sounded like I had used mirror lockup, just a lot louder.  I turned the camera off, and the mirror – or at least the mirror mechanism – finally came back down.  Looking through the viewfinder it was immediately apparent what happened, but I wasn’t exactly sure why or what was going to happen next.  The mirror had become separated from the mirror-holder-thingie that it attaches to.

Kathy and our friends up front were still marveling at the eagle and our amazing fortune to find it with such a great place to watch, and I was standing in back of the van saying, “umm, guys?  My camera just broke.”  Fortunately I had the presence of mind to pull off the old body and put my new one on.  Of course all the time I knew the eagle was going to fly off while I didn’t have a working camera in my hands.  Fortunately, he was kind enough to wait for me, and allowed me to get another dozen or so shots off before he flew off.  And I got a couple of decent flight photos.  No prize-winners, but considering the circumstances, not too shabby.

After I returned home, I packaged the camera up and sent it off to Canon Professional Services for evaluation.  A few days later I received an e-mail stating that they are going to repair the camera at no charge, calling it an “in-warranty repair.”  A friend of mine asked me if it was covered for a period of time or a number of shutter actuations.  I told him that it was covered under an “ain’t suppose to happen” warranty.  I’m still waiting for it to come back, but I expect it shortly.

So that’s the story of the broken camera.  Hopefully there will be a happy ending in a few days.