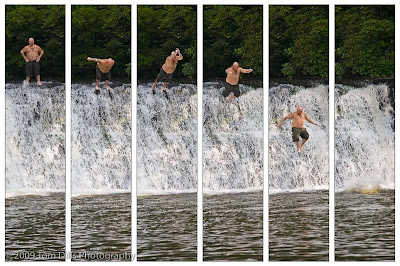 Kathy & I spent this past weekend in the Brevard area, scouting locations for an upcoming outing I am leading in October for our CNPA chapter. While at Hooker Falls in Dupont State Forest I was hoping to shoot some stock photos of people cooling off in the falls on a hot summer day. One of the shots a got was this action sequence of some very ill-advised behavior. I thought about asking for a model release but decided he probably would not have taken kindly to my asking, although he (or his next of kin) might someday want a copy of the photo.

I’m guessing there won’t be much swimming going on in October!

Photos combined using Lightroom’s Print Module and outputting them as a single file.